When Great Britain declared war on Germany in August 1914, thereby heralding the four years of carnage of the Great War, Charlie’s two eldest sons, twenty-one year-old George and nineteen year-old Stephen, promptly enlisted in the British Army to fight abroad.  Despite having turned fifty-five that year, Charlie also enlisted, serving in a number of roles in the defence of his country at home throughout the course of the War.

His first period of service was with one of the Kent-based Fortress Companies of the Royal Engineers, whose primary duties concerned coastal defence, including searchlights.  Early on in the War, the Fortress Companies sought to enlist men like Charlie who, although unfit for overseas service, could fill the places of younger men released for duty with the British Expeditionary Force.

After his time in the Royal Engineers, Charlie joined the Navy Reserve Guard, which by 1915 was actively seeking to recruit skilled fishermen like him and train them in minesweeping duties along the Kent coast.

Then in 1917 Charlie became a member of the newly formed Royal Defence Corps.  Fulfilling the same role as the Home Guard during the Second World War, that regiment provided troops for security and guard duties inside the United Kingdom, guarding important locations such as harbours and bridges.

Over the four years, therefore, it would seem that, despite his age, Charlie had a very active War on the home front.  Holding the rank of Pioneer (or non-tradesman) throughout, he built up an impressive service record.  He was the recipient of two campaign medals: the Victory Medal and the British War Medal.  On his discharge from the Army in 1919 at the ripe old age of sixty, he was also awarded the Silver War Badge, earning himself an Army pension to boot.

Although they were distant from the killing fields of Belgium and France, neither Margate nor neighbouring Ramsgate were peaceful backwaters during the War years.  The strategic importance of their harbours meant that from as early as 1915 through to the closing months of the War in 1918 both towns were the target of frequent German attacks from the air by seaplanes, aeroplanes and Zeppelin airships, with many of those attacks resulting in damage to property and some in loss of life.  The following report from The New York Times gives an account of one such attack in 1916 and conveys the mixture of fear and excitement that would have been experienced by the local population during the night-time Zeppelin raids:
Zeppelin Raid Was Futile
Searchlights and Guns Thwarted Attack on Kent and Essex
Margate and Ramsgate also came under attack from the sea, the most significant assault occurring in March 1917.  This is the Wikipedia description of that assault:
The Action of 17th March 1917
Without doubt, therefore, Margate was not the safest of places in England in which to spend the War years.  In spite of that, the photograph below, which was probably taken during the period when Charlie served with the Navy Reserve Guard, clearly shows a happy bunch of people.  Elizabeth is seated in the centre of the photograph with baby Inez on her knee.  A proud-looking Charlie stands behind her.  Also standing are their two sons, Sydney on the far left and young Charlie on the far right.  Although none of Charlie’s three sons by Amy are in the photograph, there could have been many reasons for their absence. 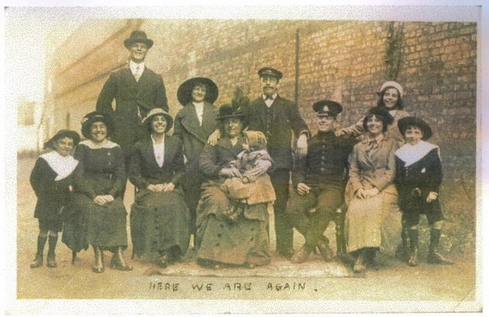 So Charlie and his family in Margate survived the Great War.  His two soldier sons, George and Stephen, also survived the fighting to return home.  As will be revealed in a later chapter, however, Stephen came back far from unscathed and would die only a few years later in 1923.